If there’s one thing that footballers are known for outside of the sport they play — no, it’s not for theatrical diving, their scandals or the WAGs they often have in tow — it’s for the eccentric hair styles they bring to the pitch along with them.

Some of those do’s have proven so popular that they’ve left the confines of soccer circles infiltrated the real world, becoming styles worn by the masses the world over. Other efforts, mercifully, died when their owners switched to their next look. But unique hair stylings have become so common in the world of professional soccer, it’s easy to forget who the real trailblazers have been when it comes to extravagant headdress.

So when French wunderkind and Juventus midfielder Paul Pogba revealed his latest cut — an excellent leopard pattern below his prototypical mohawk — it got me thinking? Who would I nominate to an Hair XI if one truly existed.

Now, it’s been absolute ages since I’ve put together a WSOTP Best XI list. In fact, it’s been so long since I’ve done one, I feel like I need to explain what exactly that means. These guys aren’t always the actual best eleven players I can fit together who meet the team requirements. Nor do they have to be current players. These are just the guys with the best examples of those who fit the category in question. And in this case, it’s the players who had the most out there, eye-catching, can’t-look-away hairstyles that we’ve seen grace the grass across the globe.

To help construct this list, I took to the Twitters to see who else should make the team aside from Mr. Pogba. And some of your suggestions were easily solid enough to make the list.

So without further adieu… the WSOTP Hair XI.

Djibril Cissé | Forward | Retired
I feel like Cissé was the original Denis Rodman of soccer: he wasn’t the first player to die his hair, but he was the first to take his hair to places players had never taken their hair before. Blonde hair wasn’t just a thing; Djibril dragged his beard into the action, too. And dude’s been at it for well over a decade now, which is pretty freaking impressive.

Mario Balotelli | Forward | AC Milan
Balotelli is famous for many, many things, and his wacky hair is probably the least offensive of them. Though most have involved some form or another of a mohawk, the diversity of style he’s brought to that one do is pretty impressive. And if you have a ridiculous shoe with a heel mohawk of its own — yes, you deserve a place on this list.

Dominic Oduro | Forward | Montreal Impact
The Ghanaian forward who’s now featured for a handful of MLS sides is probably better known for the hair he’s worn on North American pitches than his performances on them. The side of @FreakFast’s head has served as a billboard for everything from pink ribbons for Breast Cancer awareness to his favorite food of pizza, and just about every color under the sun at some point or another.

David Beckham | Right Midfield | Retired
Nobody on this list has spawned more hair styles that have been widely adopted in the real world than Sir Golden Balls. In fact, much of Beckham’s fame and celebrity was built on his ever changing hairstyles, especially during his Manchester United and Real Madrid days. And if nothing else, it’s his versatility it hairstyles that earns Becks the nod: shaved heads, dye jobs, cornrows, fauxhawks, side parts… he’s literally done it all. 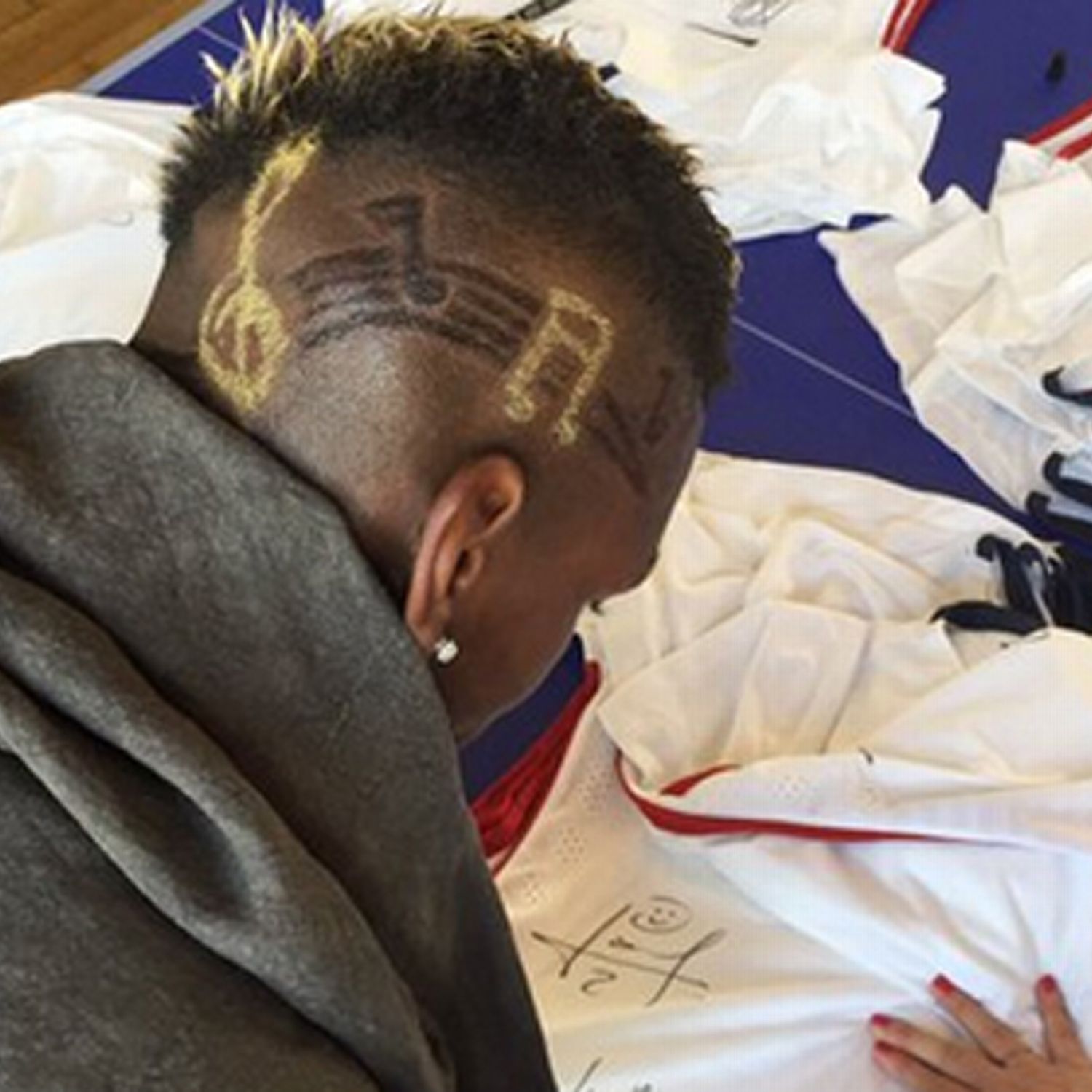 Paul Pogba | Center Midfield | Juventus
The highly sought after prospect who kicked off this list is certainly rocking an impressive, jungle themed do at the moment, but he’s sported several impressive cuts during his rise to prominence. There was the aforementioned leopard print that’s been doing the rounds this week, but he’s done stars, laurels, musical notes, uncountable abstract designs and even a hairdo inspired by “The Dab”. Yeah.

Carlos Valderrama | Center Midfield | Retired
Before Maroune Fellaini or David Luiz were even born, Carlos Valderrama was rocking the best ever footballer afro. Never mind that Valderrama ran the midfield like nobody’s business, his golden, bouncy locks are legendary the world over in their own right after impressive performances in Europe, Major League Soccer and several World Cups. His hair also spawned this digitally modified picture, which might be my favorite soccer picture ever. He even dyed it pink once for charity! Freddie Ljungberg | Left Midfield | Retired
It’s a little unfair to include a former male model like Ljungberg in the list, given the propensity for fashion conscious people to try edgier stuff. But Llungberg, who many will remember for his shaved head look in his later days at Arsenal, also used to sport some wicked colors — most notably an almost Gooner red that might have been one of the first non-natural die jobs in Premier League history.

Abel Xavier | Right Back |  Retired
Though he eventually brought his crazy stylings to North American shores with the LA Galaxy, the Portuguese defender sported some absolutely bonkers hair and beard combinations — mostly blonde — over the years for the likes several English clubs and several clubs around several European leagues. In fact, at age 43 he’s still rocking the blonde hair as manager of Mozambique. Hell, maybe he’s even the manager for this team… I’ve not hired one yet!

Alexi Lalas | Center Back | Retired
Plenty of guys have worn long hair in the world of soccer. Plenty more of sported goatees. And though smaller, there have been a decent number of those who rocked both at the same time. But outside of Lalas, I’m not aware of a single player who not only did both of those things, but did so with ginger hair that burned as red as the fires of hell. And given the commentary that now spews from him mouth, many American soccer fans might feel he came from there, too.

Taribo West | Left Back | Retired
The fame gained by the Nigerian defender — who was a very competent player in Nigeria’s golden generation of the late 90’s and early 2000’s — is probably at least 50% due to his easily unmistakable green horns.

David Seaman | Goalkeeper | Retired
If David Seaman were a player today, not only would he have a been a star of a Head & Shoulders commercial by now, but also probably for Just for Men: Beard and Mustache commercial too. The England and Arsenal keeper rocked both his long, silky ponytail and bushy walrus mustache far longer than either trend was popular — but seeing him now without both just feels wrong.

No side is complete without some reserve players, and the WSOTP All-Hair XI is no different. The following guys would not only make our bench, but probably push for starting time, too:

Marek Hamšík | Midfield | Napoli
The Slovak attacking midfielder might be the finest connoisseur of the mohawk ever, with varying degrees of color, height and sharpness.

Sir Bobby Charlton | Midfield | Retired
Either nobody tried to talk Sir Bobby out of a comb over only Donald Trump could appreciate, or everyone let it slide since he helped England lift their only World Cup trophy.

Carles Puyol | Defender | Retired
The long, curly, unkempt locks that helped him to earn his “Caveman” moniker was almost — but not quite — enough to knock Alexi Lalas out of starting XI.

Javier Margas | Defender | Retired
The former West Ham defender was one of the pioneers of patriotic hair coloring.

Not sure why, but it seems like Italian teams have a propensity for the odd hairstyle or two. Also, this team’s first match would have to be against the time traveling Slim Shady fans that were the Romanian 1998 national team.

Have anyone whose hair makes them worthy of inclusion, but don’t seem them above? Hit up the comments.