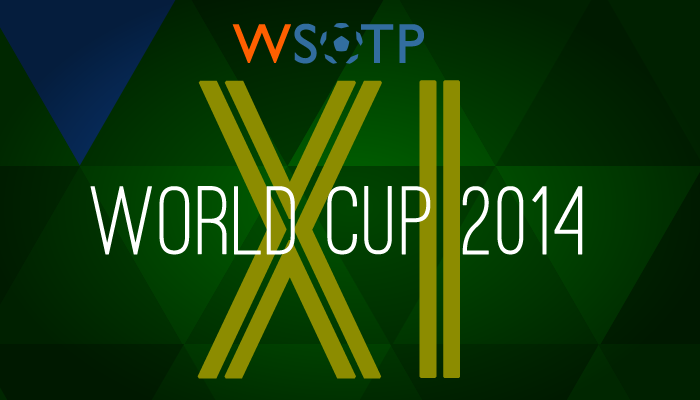 Without a doubt, this was the best World Cup I had the privilege of watching.

An impetus for attacking was shared by nearly every team at the tournament, with a record-tying 171 goals tallied in Brazil. The biggest stars of the game all turned up, notching important goals and providing key moments. Goalkeepers were in fine form as well, producing spectacular save after spectacular save. And there was ample drama, from the refereeing to player theatrics on the pitch.

Honestly, it’s hard to accept that it’s now over.

But now that I’ve had ample time to reflect back on the tournament — like everyone else in the world — I think it’s high time I get down to selecting my team of the tournament.

While there were some shoe-ins in there that just about everyone selected, I may as well dump out one spoiler at this point: I didn’t select Messi. That may seem a little unfair given that how influential he was in Argentina’s run to the final in Rio, there was such stiff competition in the areas of the pitch he could be deployed, I just couldn’t find room in my eleven for arguably the world’s best player. Crucify me in the comments for the decision if you like.

So who did make the WSOTP World Cup Best XI and bumped the Argentine Flea from contention? Read on to find out.

Goalkeeper: Manuel Neuer | Germany
Keepers always get the short end of the stick. Despite their being many worthy candidates — Argentina’s Sergio Romero, Chile’s Claudio Bravo, Costa Rica’s Keylar Navas, Mexico’s Memo Ochoa and even our own Tim Howard — only one gets to start. And the Bayern Munich netminder gets my nod for both his stellar keeping and his breathtaking sweeping.

Left Back: Daley Blind | Netherlands
Playing as the left wing back in front of Holland’s back three, Blind was enabled to move forward into the Dutch attack. And he did so to great effect: he lobbed countless pinpoint crosses into the Robin van Persie and Klas Jan Huntelaar. But he was also pivotal in covering for Dutch wingers who were pushed even higher and rarely tasked with tracking back.

Center Back: Giancarlo González | Costa Rica
If you had told me at the beginning of this tournament that I was going to have an MLS player on this list — nay a Columbus Crew player — I would have told you that you were crazy. But González anchored a Costa Rican back line that conceded just two goals in five matches and 490 minutes of football. He also helped to run an offside trap that was executed near perfectly, which I haven’t seen anyone do at the top level of football in some time.

Center Back: Mats Hummels | Germany
Despite long being prone to being resigned to the training table — with a flu big sidelining him in the Round of 16 and a knee issue a few days before the final casting doubt on his participation — Hummels mostly was able to keep off of it throughout the tournament. And alongside the next man to make my XI, he was able to create a stonewall in the back for the Germans.

Right Back: Philipp Lahm | Germany
I’m admittedly a huge Lahm fan. He’s managed to pull of a trick that I, as an outside back, have always wanted to do: abandon the backline and move to the middle of the park. And that’s where he was stationed for the first half of the tournament. But in the later stages, he moved back to his home in the back and helped the Germans to dismantle Brazil in silence Messi.

Defensive Midfield: Javier Mascherano | Argentina
Though the Barcelona man has spent the bulk of his time in Spain playing as a converted centerback, he was mainly deployed in his traditional role of midfield destroyer once again in Brazil. And he did an amazing job of locking down some of the tournament’s most brilliant offensive threats in the process. His brilliant tackle to deny Robben late on in the semifinal — even though he probably shouldn’t have been on the pitch due to a likely concussion — was just one such example.

Holding Midfield: Arturo Vidal | Chile
This was another position that I had a hard time picking as there were quite a few impressive performers in this portion of the pitch. I had a hard time justifying leaving out either of Colombia’s Juan Cuadrado and Germany’s Toni Kroos. But I’ve gone for the dynamic Juventus (for now) midfielder for not only his stellar distribution, but also for his heart and commitment to the cause. He did a little bit of everything for Chile, and was unlucky not to drag them past Brazil in the Round of 16.

Attacking Midfield: James Rodríguez | Colombia
What can I really say that hasn’t already be said about James, aside from making sure to pronounces his name correctly — “HA-miss”. That said, the tournament’s Golden Boot winner was absolutely a joy to watch, so much so that you hardly noticed that Colombia were missing Radamel Falcao. You know he was a threat when Brazil decided to base their entire strategy in their quarterfinal match up around hacking him every time he was on the ball… and off it. And in my humble opinion, he was the tournament’s best player.

Left Midfield: Neymar | Brazil
Once the Barcelona man was tragically knocked out of the tournament in the quarterfinals against Brazil — a cost of the war his team waged against James — it was clear just how much Neymar was helping to paper over the cracks of a very flawed Brazil side. But when he was in the team, the Seleçao almost always had a chance. Without him, they had very little. He did far more with less than just about any player in the tournament.

Right Midfielder: Arjen Robben | Netherlands
Though many took issue with his diving earlier in the tournament, Robben was by far at his best this tournament. Aside from the semifinal against Argentina, where they were effective in preventing him from seeing much of the ball, he was a constant threat. He showed tremendous speed, a nose for goal, and penchant for creating for his teammates too. With all due respect to Messi, he was really the only other player aside from James who I considered worthy of the Golden Ball in Brazil.

Center Forward: Thomas Müller | Germany
While his elder-teammate Miroslav Klose stole many of the headlines after breaking the all-time World Cup scoring record, Müller may very well end up being the man that ends up breaking his compatriot’s record. Just 24, he already has 10 World Cup goals in 13 appearances. But it’s his versatility that also helped to make him so valuable for the champions, as he took up shop on both wings and leading the line at center forward a few times as well. And to think, he’ll the Bayern man will be hitting his prime in Russia in 2018.