When it comes to American soccer, outside of World Cups, there’s nothing that quite captures the attention of the American public like USA-Mexico games. I won’t get into the main talking points you usually hear tossed about for ahead of the game; everyone is else writing about that, so there’s plenty for you to read there. But there is an aspect of the game that I feel like isn’t getting proper attention ahead of the game tonight…

Why the hell is US Soccer doing advertising this game as a “Dos a Cero” before the first ball has even been kicked?

I get it. If you’ve watched ten seconds of Sports Center this week, you know that U.S. has dominated the rivalry over the last few years and mainly by 2-0 score lines. To be specific, the Americans have won 8 of their last 23 matches since 1990 with that score.

But with the U.S. team being the victors with that scoreline so frequently in the near past, it’s easy to forget that Mexico have netted a few Dos A Cero’s themselves. Four, actually. And El Trí still lead the series with 33 wins to the Yanks’ 19.

So labeling a crucial match with real importance riding on the result a “Dos A Cero” seems to be a major case of putting the cart before the horse. It’s disrespectful of our opponents and the ability they possess. It’s not like it’s a given that U.S. are going to win this game. But we’re making television commercials that center around and social media campaigns centered upon a name that should only be applied after a 2-0 result is actually secured?

Karma doesn’t take nicely to that kind of stuff.

So because the US Soccer Federation has forgotten — and since many, many, many fans are following their lead — I’ve made the handy guide below to help everyone remember when it is, and isn’t, okay to label a game a “Dos A Cero”. 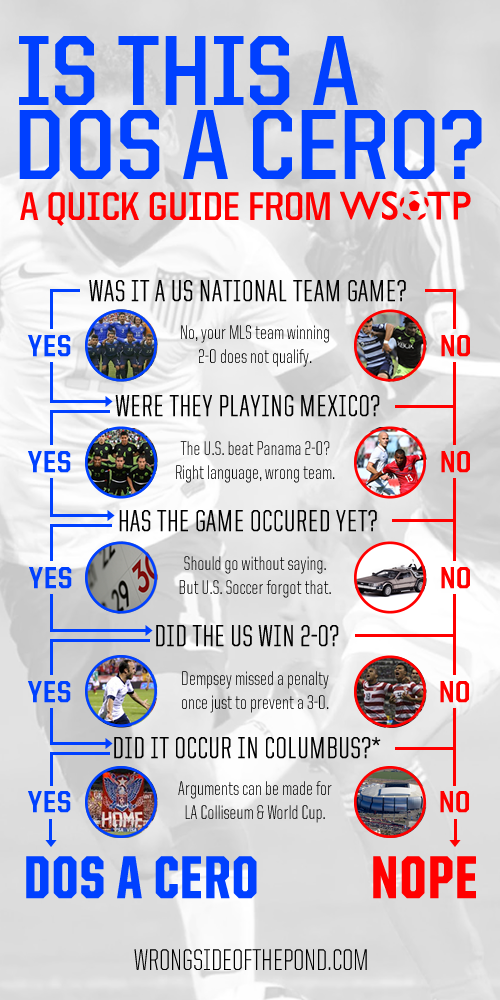