this is part V in the “wrong side XI” series, where i’ll be selecting my very own starting eleven, assuming of course that i could choose any player from any team in the world. you can read the rules i’ll be following to make my team selection, and what formation i’ll be squeezing them into, on the first post in the series.

Once upon a time, in between stints of playing in my favored left back spot, I often took up residence as a centerback. I was never particularly fond of it, much because playing the position made me feel like i had a leash around my neck that was tied to the penalty box. But as often as possible, I would break my invisible chain and make forays into the attack. Much to the chagrin of my coach, of course.

And though I didn’t know it at the time, the style with which I played the position actually had a name: libero. When I first learned that factoid, the defensive volleyball position of the same name came to mind. And for those familiar with both sports, it’s a perfect description for this type of player: a player who defense starts the offense. However, let’s also keep in mind what I wrote in the first post about this position:

Generally though, these occasional flights into the offensive half should coincide with the launch of counter attacks. That’s not to say that the libero can’t join in an offensive passing movement from time to time, but his primary concern regardless of how the attack is flowing is to make sure if he goes forward that someone is stepping in to plug his hole (quit laughing).

Defensively, the role of the libero and the normal center back is practically indistinguishable. Organize the defense, keep an eye on the striker(s) and prevent the other team from scoring. Simple as pie, right?

Surprisingly, what I came to find when it was time to decide who would be considered for my libero spot, is that there really aren’t that many players that are solely classified as liberos. Everyone is just classified as center backs, center halves, or sweepers. Ultimately, that means that I have the freedom to go out and choose whomever I want, because no one is really classified as one.

So who did I classify as a libero? Read on my friends…

Unless you’re an ardent fan of Die Mannschaft or the Bundesliga, I wouldn’t be all that shocked if you didn’t know much about Mertesacker. But if you’ve ever seen the German national team or Werder Bremen play in the last few years, there’s really no way you were able to miss him. You see, Per stands in a giant-esque 6’6″… a towering height that few in world football can come close to matching or exceeding.

In much the same way as the equally lanky Peter Crouch, Per is rather skilled and confident on the ball for his size. You can’t help but be in amazed as you watch what would appear to be a 7-foot scarecrow playing soccer amongst a group of extremely fit midgets. You would think he would be out there wildly swinging his lengthly limbs, chopping everyone down on accident. But, somehow he manages to pull it off and is noted as being one of the cleanest defenders in Germany. And it’s also that height that makes him extremely difficult to deal with on offensive corners and set pieces. In 216 Bundesliga appearances, the centerback has notched 19 goals.

Uunfortunately for Per (and several other players higher up the list) and his selection chances, he’s a bit injury prone. And while his size is of great value, he sacrifices speed that is often a necessary to recover in the libero role.

Oh danny boy, if only you could stay healthy. The Liverpool centerback, when fit, is a force to be reckoned with coming out of the back. But unfortunately for the Dane, he’s only mildly more reliable than treatment-table regulars Ledley King, Jonathan Woodgate and Owen Hargreaves. Needless to say, his participation in this team is negated by his propensity to be stuck to the sidelines.

On the off chance that he is healthy for a good stretch, Agger is very talented in distribution moving forward. For a defender, he provides both quality services from the flanks as well as by linking into passing movements. It’s not unusual to see him move up the pitch with a few give and gos… assuming he’s actually out there of course. Numerous links to Real Madrid shows that I’m not the only one who thinks the free-flowing Spanish style of football isn’t beyond his capabilities.

Alas, the boy is rarely available, and I’m not picking players to fill my imaginary training room either.

Versatility is a useful skill in modern football, and the 26-year-old’s versatility in the defensive end of the field is what makes him an ideal candidate for my libero. Though the Brazilian’s first move to Europe (at Porto and Dynamo Moscow) was underwhelming, he re-established himself as a European-calibre center back at Fluminese. However, it’s his ability to also play as a defensive center midfielder that makes him extremely appealing for this spot in the team.

Tiago Silva was extremely impressive for the Seleção at the Confederations Cup in 2009, and earned himself a move to A.C. Milan (which also seemed to kill any chances of a fit Oguchi Onyewu ever finding time on the pitch). In his time in Milan, he’s not only stepped in and performed well in the Rossoneri‘s legendary defense, but also as a defensive midfielder. Guys don’t get put into the center of the midfield if they have zero ability to move and play forward (aside from Jermaine Jenas but anyway….).

Though it’s been a rough year of injury for the Belgian Gunner, I still have tremendous faith in his abilities. While Arsenal enjoyed early season success even after his early season injury, they eventually faded due to a leaky backline. Such is his importance to the team’s defensive cohesiveness, I have no doubt that a fit Vermaelen in their ranks might have been enough to keep Arsenal in the title race. His absence was certainly felt by Arsene Wenger’s men, and none of the replacements brought in this season could fill his sizable boots.

In defense, Vermaelen is of the Cannavaro-mold: while he’s great at 1v1 defending and strong in the air, what really set’s him apart is his ability to read and cut off passing lanes. Even from 20 yards away, with teammates between himself and the ball, the Belgian affects the play with his field knowledge and placement. Couple that with smooth foot skills that would suit just about any defensive midfielder, Vermaelen is a true Arsene Wenger-style player moving forward. With 8 goals in only 37 appearances for the Gunners, he clearly can contribute on the offensive end.

But much like Agger and Mertesacker, a long lay off from a serious injury is very troubling. Thomas missed 8 months due to an achilles injury, and that’s a tricky tendon to heal. However, a recent return to the Arsenal starting XI (albeit a loss to Aston Villa) shows he could be on the right track. Here’s hoping he makes me look foolish for not selecting him.

In the imaginary world in which this series of articles exists, I’m really hoping that my tendency to give talented youngsters a shot doesn’t come back and bite me in the ass. And this time, I didn’t just include the guy in the list of people i considered… I actually picked David Luiz on his potential. But there’s just something I love about the young Brazilian.

Following his big money move from Benfica midway through the season, Luiz has undoubtedly adjusted as he’s set the Premiership ablaze with some sparkling performances (Yes, he’s had some howlers too). In fact, he’s been twice as prolific in front of goal as the player that was signed the same day as him for twice as much in five less games started. All of that from the opposite end of the pitch. Vital goals against the Manchester clubs has shown he has a knack to produce in big matches too.

Now sure, he’s got a ways to go. He’s at times immature, going in recklessly and taking risks that young, stupid players tend to take. But it’s those same qualities that also make him so good. He’s intense, tireless, has a big presence on the field (and not just because of his iconic mop) and pushes onward regardless of  the circumstances… an anything to win mentality. That’s rare in players these days, especially for someone who’s only 24 years old. Plus, he does goofy crap like this to make you just love the guy. Once he settles down, I have little doubt  that he won’t be one of the finest center backs on the planet. 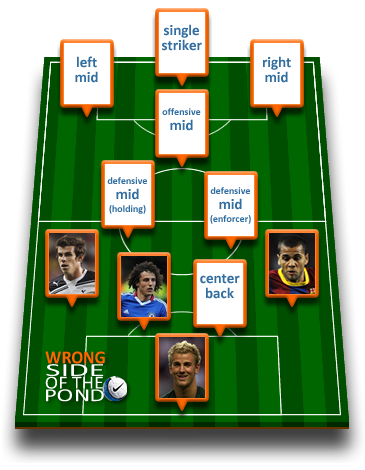 So David Luiz pulls away with my starting libero slot. Admittedly, Luiz claiming the spot shouldn’t be that hard when faced up against a bunch of guys that are tied to the training table. The next question becomes who will partner him in the center of defence… and for that answer you’ll have to check back for the next post in the series. To see my other selections to this point, check out the following links: