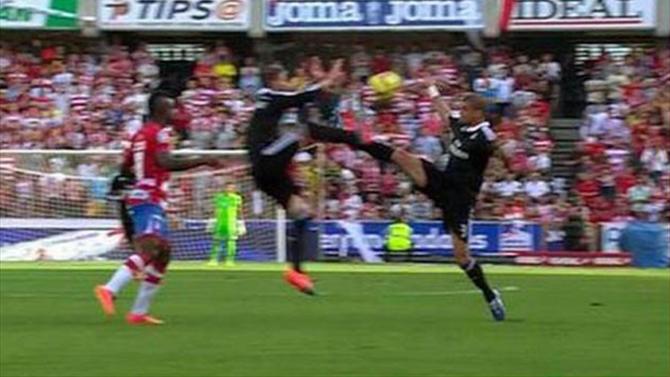 This week’s admittedly blurry “Pic of the Week” comes to us from La Liga, where Spanish giants Real Madrid visited minnows Granada at the weekend. The match itself went about how you might expect, with Real securing a 4-0 win and Ronaldo tallying his ridiculous 17th goal in the league despite only having featured in 9 matches. But that goal tally wasn’t the most ridiculous moment of the game, as that honor belongs to his fellow Portuguese teammate Pepe. The defender is a player well known for his rash challenges and quick-to-boil demeanor. We’ve all gotten used to him headbutting, hacking and even assaulting opposing players for years now. But I never expected him to try to murder a player on his own team. Until this weekend, that is.

Captured in the image above and in the video linked here, Pepe nearly impaled teammate and fellow mad man Sergio Ramos in straight Nigel De Jong fashion in the match. Admittedly, both players were attempting to clear a ball rather than challenge one another. But it just goes to show that no matter what team you play for, you need to be wary of stepping on the same field as Pepe… else it might be the last time you ever do.