Someone get Punxsutawney Phil on the phone, because that bastard is a liar. Like most meteorologists, the over sized rodent didn’t see his shadow which meant winter was over with. We even passed the March equinox two days before kickoff, so we’re officially in Spring. Apparently, Mother Nature feels no need to answer groundhogs or astronomical phenomenons.

Case in point: last night’s 2014 FIFA World Cup qualifier between the United States and Costa Rica outside Denver, Colorado. It was a spectacle not because of a sublime performance unfolding on the pitch at Dick’s Sporting Goods Park, but more because of the ridiculous amounts of snow that fell during it. Reported up to 6 inches of pow fell down during the match — which was repeatedly cleared prior to and throughout the match — making for unusually poor playing and viewing conditions. Even with an 80″ HD screen to take in the action, the sheer amounts of snow falling effectively rendered Nike’s “Hi-Vis” ball invisible at times.

Regardless, it still made for some absolutely fascinating scenes, some many will never forget (a gutsy, 1-0 US win doesn’t hurt either). And this morning, I’ve scoured the internet to unearth some of the best shots from last night’s so-called Snow Clásico. 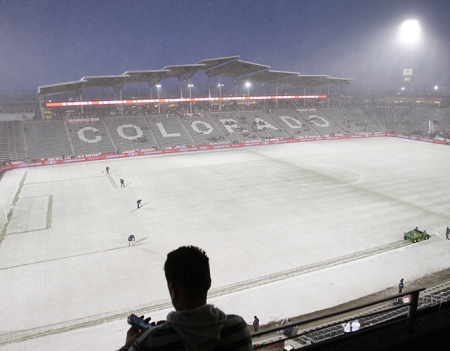 Prior to the match, everyone was a little worried it might be called before kickoff. 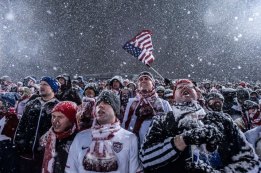 I doubt the American Outlaws would have been very happy had a game not gone down. 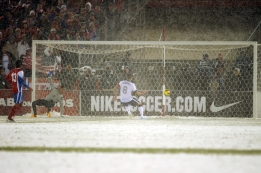 Clint Dempsey gives the US an early lead, and the eventual winner against Costa Rica 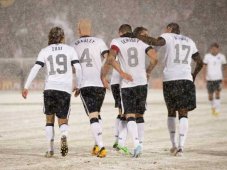 The boys celebrate in the snow after Dempsey’s goal.

We hereby christen Jermaine Jones as “The Snow Fro”

So much came down, that a freaking plow became necessary.

A full shot of Dick’s Sporting Good Park in all it’s snowy glory.

At least Hercules Gomez had a clear space to take this corner. 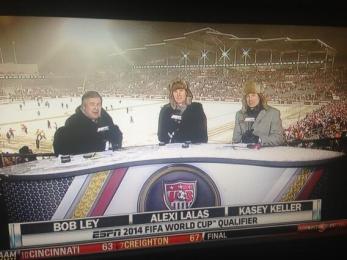 Not even ESPN’s commentating team was safe from the elements. 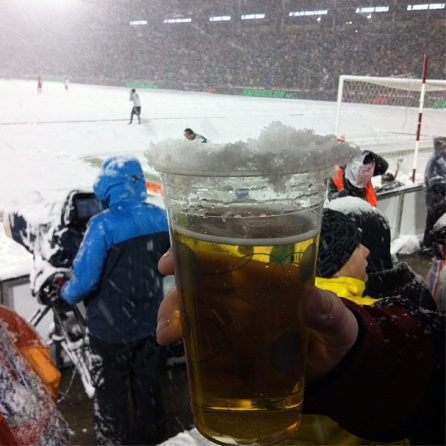 WSOTP drinking buddy Free Beer Movement shows us that even his beer wasn’t safe from the elements.

Yeah, this would suck.

Suddenly the most sought after shovel in the United States.