Sitting in an auditorium on the campus of the University of Cincinnati yesterday morning before the press conference had even started, I got the feeling that whatever was about to unfold at today’s official FC Cincinnati unveiling was going to change the face of soccer in the Queen City forever.

I’ve been around the Cincinnati soccer scene for 25 years — seeing “professional” clubs come and go as a player, a fan and a member of the media — and I can honestly say that I’ve never before had that kind of feeling about anything soccer related here before.

Perhaps it felt that way due to the long list of big names in attendance.

There was United Soccer League’s president Jake Edwards, as would be expected at a USL expansion announcement. The Dayton Dutch Lions ownership was there as well, minority investors in the team. Too, there was former Columbus Crew president Mark McCullers, who we would learn will be an assistant to the general manager for FCC. And how could we forget John Harkes, the former US men’s national team captain who will be taking the touchline reigns for the club’s inaugural season in 2016. Last but not least, some of the coaches and directors of the most influential youth clubs in the city were also in attendance.

Those were just some of the soccer names involved. From a local perspective, the room was venerable who’s who of Cincinnati power players. Cincinnati Mayor John Cranley played the role of occasional emcee at the event, introducing the likes of Edwards, former city councilman and club president Jeff Berding, and eventually majority team owner Carl Lindner III. The latter of whom, with a net worth approaching $2 billion, brought an air of prestige that no previous professional soccer efforts in this city had ever managed.

Then there were the Cincinnati media bigwigs in attendance: the Cincinnati Enquirer, local television and radio stations, and a few noteworthy regional bloggers, too. Seeing all show up at one time for one soccer event? Another occurrence we’ve never seen before in this town.

If you’ve followed me on Twitter for any length of time before today, or have listened to our podcast, you’ll know that I’ve been skeptical of what FC Cincinnati were allegedly pursuing. That stance has largely been built upon the city’s checkered past with the higher levels of the sport. But it was also further solidified by the seemingly audacious goals this new team was allegedly being associated with.

Not helping any of that: my association with the city’s pre-existing club. I naturally felt defensive; the NPSL’s Cincinnati Saints had been left out of the equation, despite six years of effort from their ownership and other members of the Cincinnati soccer community — myself included.

But checking allegiances and pre-conceived notions at the door, I wanted to ensure that I gave FCC a chance to prove themselves before casting them to the side as just another struggling effort to get professional soccer to succeed on the banks of the Ohio River.

The scale of everything and the names involved made that a lot easier. Everything just seemed so much larger, so much better organized, and far more ambitious than anyone in this town has ever managed before. Deep pockets will often do that for you, and with the Lindners on board, those pockets go really deep.

But of everything that the club and attendees spoke about today, it was FC Cincinnati’s ambition that captivated me the most as I walked away from the event.

Not that other clubs here haven’t shown ambition. Quite the opposite, actually. But the scope and means of FCC are clearly a level above.

As has become somewhat regular for newly announced USL sides, rumors prior to today’s launch had indicated that Major League Soccer was FCC’s true ambition. I had quickly written that off as speculative due simply to the amount of money necessary to achieve such a feat. But other impediments stand in the way of achieving that goal, too. For one, MLS has — or at a bare minimum, had — an exclusivity clause with Columbus Crew SC granting them the sole franchise rights in Ohio. Too, there’s the issue of the city’s routinely poor support for the other professional grade clubs that have been propped up in town.

A billionaire’s involvement could potentially change all of that, though. 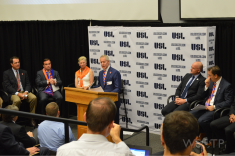 As one of Cincinnati’s richest men, billionaire Carl Lindner III will the majority owner and CEO of FCC.

Bringing in a name of John Harkes’ caliber and fame is just one of the many ways FCC are showing their ambitions.

The Lindners are in no way a “minor league” investors. Carl III’s father previously owned Major League Baseball’s Reds and he himself has a sizable investment into the National Football League’s Bengals. And what of the rumored Ohio-exclusivity deal with Columbus? Offer to throw a hundred million in MLS’ direction and they’ll at least be willing to hear you out — if not change the rules entirely. And with that type of money on the table, that means that FC Cincinnati have the means to market the side in a way that no other club here has been able to afford to do.

But whether or not a club that hasn’t even kicked a ball in USL yet harbors those kind of audacious ambitions wasn’t yet known.

Newly minted club President and General Manager Jeff Berding certainly didn’t shy away from the matter when asked at the introductory press conference.

“The vision that we have for professional soccer that in Cincinnati is at the highest level,” Berding offered. When I asked more directly if the club held aspirations to become an MLS franchise, Berding answered far more directly. “Absolutely, yes.”

Berding would go on to offer a far more interesting take later that evening at one of the club’s first public events, a meet and greet at local soccer bar Rhinehaus: not only do FC Cincinnati aspire to be in MLS, they’ve already held discussions to do so.

Berding claimed that the club have already spoken with MLS commissioner Don Garber and that the pursuit of an MLS franchise is the reason why Carl Lindner — reportedly good friends with principal MLS investor and LA Galaxy owner Phil Anschutz — is even involved in the first place. And shockingly, the timetable he referred to was in the next 5 years.

That, however, doesn’t mean I still don’t hold on to some skepticism. Is the possibility of a rivalry between Cincinnati and Columbus enough for MLS to overturn any Ohio exclusivity that the Crew may still hold on to? To answer that question, Cincinnati will first have to prove it even has the fans to create that rivalry. And as I’ve stated many times before, the city’s appetite for pro soccer here in the past hasn’t exactly proven it does.

Can they draw that kind of support? We’ll see.

There were a large number of “fans” in attendance today, often referenced by the Berding and USL commissioner Edwards. But considering the club was just announced yesterday, those supporters are likely only there via astroturfing efforts by the club. That’s natural for a new franchise — though different from recent USL expansions to Louisville and St. Louis which featured fans calling for a team before their announcements — but not a guarantee of long-term success on the attendance front.

But what is clear is that FC Cincinnati want to go down that path to growing more organic support and grow this club in a way they see fit. Their plan to forgo an MLS club affiliation supports that theory too; they obviously want to steer their own ship.

What happens if that MLS dream never comes to fruition? Have the Lindners signed on for a life permanently in the lower tiers? Berding thinks they can avoid that scenario, but drawing sizable crowds is something they will absolutely need to address to realize those objectives. For the time being at least, they’ll focus on efforts to dance around that concern as best they can.

And with the ambition and money there, what’s left for FC Cincinnati, Harkes, Berding and Lindner to do?

Everything necessary to make those lofty objectives happen.

For more info and additional perspective, be sure to check out the write up on the event from USL insider, Chad Hollingsworth, at ScratchingthePitch.com.